THE YEAR OF ALL RECORDS

After starting 2020 at an all-time high, the US stock markets as well as all other financial centers have sharply corrected. As the Covid-19 pandemic accelerates, governments have taken unprecedented decisions, resulting into the fastest and most severe recession.

Central banks - led by the US Federal Reserve - have flooded the market with liquidity through numerous support plans. In a matter of weeks, it reduced its key rates to 0.25%, increased the amount of its purchases of US Treasury bonds and mortgage-backed securities. For the first time in its history, it bought directly corporate bonds on markets but also through collective vehicles.

Governments have not been left out. After announcing partial containments on the whole planet, they initiated support plans in no way commensurate with what had been done in the past. Deficits have soared. The US budget deficit fell from -4.7% 2019 year-end to -14% at September 2020 end. The indebtedness of the world's leading economy jumped from 106% of GDP in 2019 to 127% at Q3 2020 end. Other countries not being outdone. They have also invested heavily in finding a vaccine.

US growth has broken records

In the wake of the containment measures, in Q2 2020, the US economy contracted by more than 31% on an annualized basis, a level never seen even in times of war or during the great recession. An equally impressive Q3 followed, with a record growth rebound to +33%.

The stock markets have been more than heckled. The S&P500, the New York Stock Exchange flagship index, set a new all-time high in February, before experiencing its fastest correction. The index fell nearly 35% between February 19th and March 23rd. Following announcements from central banks and governments, it rebounded sharply, anticipating the reopening of economies. The digitization players have been the main beneficiaries. Subsequently, the news that several vaccines had been discovered in record time, just after the announcement of Joe Biden's victory in the US presidential election offered new support to financial markets. The S&P500 ends 2020 at record levels.

Gold took full advantage of the anxiety-provoking context. Like the USD, it benefited from its safe-haven status and appreciated more than 37% through early August. Subsequently, with the announcement of the success of vaccine research, it has consolidated.

Significant losses for the world economy

After the global economy rebounded in the third quarter, a new surge of Covid-19 is weighing on several major economies. In contrast, the global manufacturing industry continues to benefit from a catch-up after the spring trough, with international trade dynamics supporting container transport volumes which exceeded 2019 levels in September.

At this point, there are two major uncertainties regarding future growth paths. The first is linked to the duration of the health crisis and the second to the potential costs of the economic crisis. The role of economic policies will be decisive in the quarters and years to come.

The vaccine outlook has been very optimistic. But remains uncertain in the short term, in particular because of the considerable challenges in terms of logistics and communication linked to the deployment of vaccines. Questions remain relative to the effectiveness and duration of their protection. Currently, Covid-19 is actively circulating and major economies governments have been forced to tighten social distancing measures. The experience of the first wave generally resulted in less drastic measures than in the spring.

Regarding the second uncertainty about potential economic costs or post-crisis damages, many questions remain unanswered. For households, it is the rise in structural unemployment and changes in the labor market. For companies, the problem will come from higher leverage and lower potential profitability and industry transformations. For governments, the source of concern will be the increase in public debt and their sustainability in the medium / long term.

These issues are the consequence of the large losses in global production expected over the forecast horizon as well as the weakening of growth potential. The historic contraction of world GDP in 2020 is expected to be followed by a sharp rebound in 2021. Nevertheless, in advanced economies, GDP is only expected to catch up to its 2019 level in 2022, while emerging economies are expected to return to their level of 2019 GDP earlier in 2021. 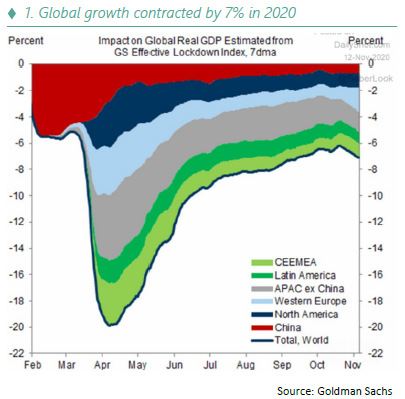 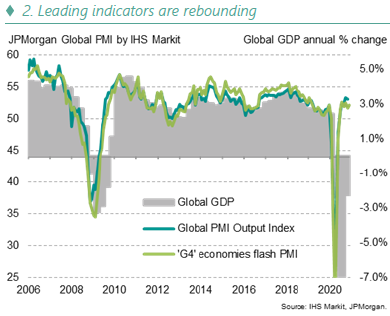 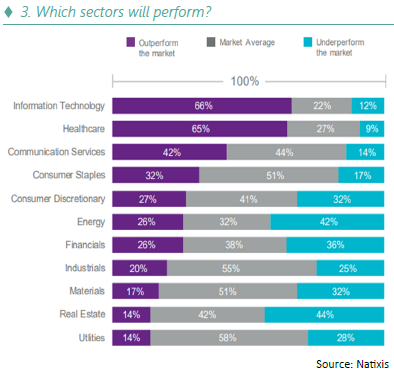 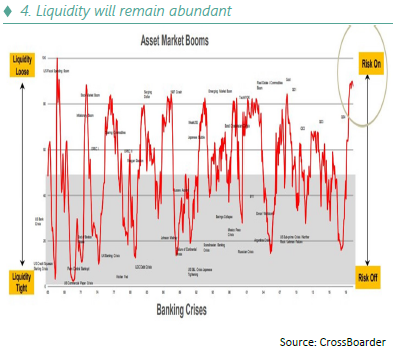 The USD is losing its haughtiness

The EUR is gradually becoming the most used currency for global payments. For the first time since February 2013, it has outpaced the USD, according to SWIFT which handles cross-border payment messages for more than 11’000 financial institutions in 200 countries.

The EUR retakes the crown ahead of the USD. About 38% of the SWIFT cash transfers were lately handled in EUR, the largest portion since September 2013. This was an increase of more than 6 percentage points on a year-to-date basis. The USD use fell about 4.6 percentage points over the same period to 37.6% of transactions. It peaked at 45.3% in April 2015. The GBP, JPY and CAD currencies together held 12.25% of transactions. The CNY share fell to 1.6%, in its worst reading since April, and lost its 5th positing at the benefit of the CAD.

Most EM countries are partnering to reduce their dependence on the USD. Russia reduced the USD share of its exports to China at the benefit of the EUR. Over 50% of the Russian goods bought by China in Q1 were priced in EUR, according to Bank of Russia. The share of the EUR in payment for exports to the EU increased to 43% from 38% in 2020. The shift is part of the Russian economy de-dollarization to lower its vulnerability to US sanctions. It accelerated, with Russian oil giant Rosneft transferred all export contracts into EUR last year. 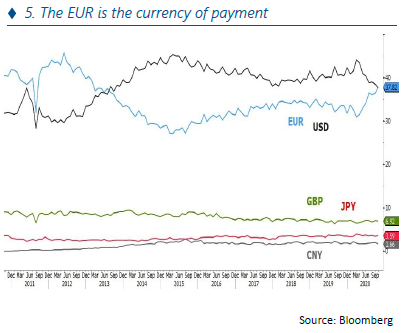 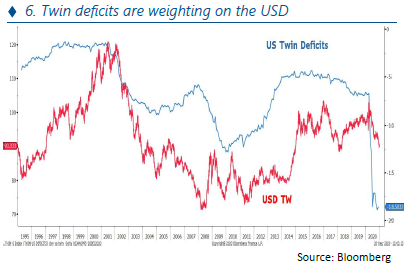 Our starting point is that global policymakers clearly want to minimize the effect of Covid-19 stigma. Their success in convincing the market of their aim can be judged from the slope of yield curves. Typically, a flatter yield curve is associated with a stronger USD and a steeper one - reflecting reflationary policies - is typically associated with a weaker USD. The US Treasury curve has already steepened by 70bps from its recent lows. A yield curve steepening will be consistent with a weaker USD. 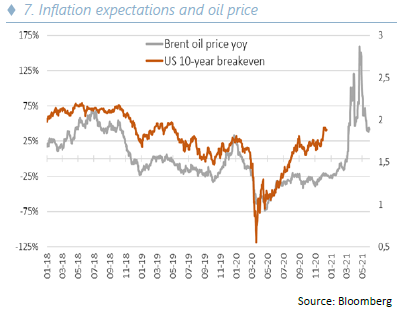 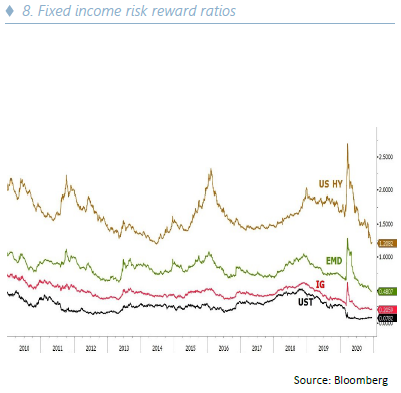 The Fed has reshuffled its inflation approach and that is good news. It replaced its previous inflation target – close to 2% - by an Average Inflation Target - tolerating inflation above 2% for some time. This matters because under the old-fashioned inflation target the Fed has never had any intention to make up for previous policy blunders. And furthermore, the Fed has constantly undershot its target since 2008. And the old framework did not allow for any commitment to make up for past mistakes, therefore leading to an erosion of credibility over time.

Now, the Fed will need to make up for previous mistakes by delivering higher inflation in the future after a series of misses on the downside. Given the misses in recent years together with the 2020 deflationary shock, the Fed would have to aim for 2.5% inflation or more within the next years right away.

Oil prices will send inflation skywards in Q2. Assuming current oil prices as a forecast for the next months, WTI oil prices will be up by 180% yoy in April and Brent oil prices by 90%. Such base effects usually boost inflation expectations and can also have a positive effect on term premiums i.e. a risk for bonds. Inflation-linked bonds will be the big beneficiary.

Investors need now to take on increased risks to achieve attractive returns. This is supported by the high level of oversubscription on new issues all over 2020. Investors will continue to see sell-off as buying opportunities. These structural factors are unlikely to change imminently.

Expectations of a strong recovery in 2021 mean improving fundamentals. 2020 has been positive for corporate behavior: companies cut dividends and stock buybacks, leveraged buyouts have fallen and M&A were low. As yields are near all-time lows, with huge amounts of available cash in PE funds, corporate behavior could be less optimal next year. The focus will shift from balancing default risk and the search for yield to navigating stormier waters.

The stock markets are not correcting, backed by central banks and vaccines

Sectoral and geographic rotations are happening. Investors are not leaving equity markets; they want to remain in position for the beginning of 2021, when the great rotation on the Value / cyclical will be confirmed.

We remain positive on equities for H1 2021 with central banks still very accommodating due to a struggling economy, generous fiscal and budget plans, as well as expectations of a global economic recovery with global vaccination starting, by favoring the Value / cyclical segment.

Profits are expected to rise sharply in 2021 due to a catch-up effect with +22% for the S&P 500 and +40% for the Stoxx 600. But not only. Companies could emerge stronger from this pandemic and with higher margins thanks to restructuring, changes in business models and the integration of digitization.

For 2021, the main risk for equities is a rise in inflation that would defy current market valuations, although the likelihood of inflation out of control is low. The evolution of the dollar has an impact on asset classes, in absolute and/or relative terms.

The winners of a falling dollar are: 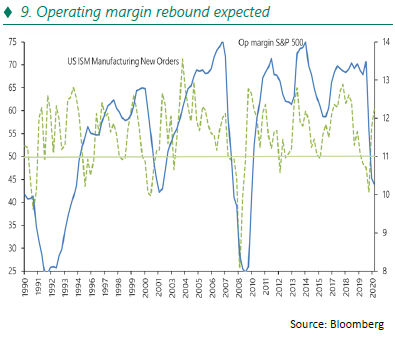 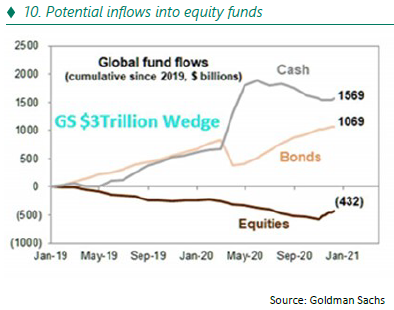 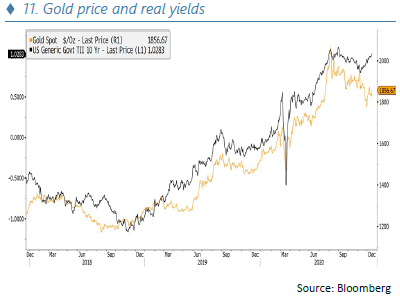 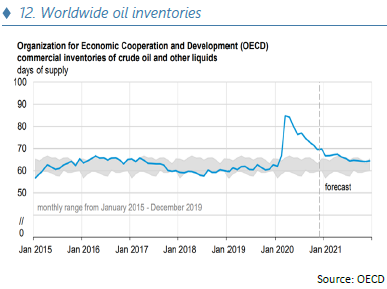 The pandemic situation is benefiting to gold, while industrial metals anticipate the economic recovery.

With the announcement of vaccines, investors cut their holdings in ETFs/funds invested in physical gold. It has resulted in a decline in the price of gold at the advantage of riskier assets, especially cyclical companies.

However, gold will sill benefit from low real interest rates, which lately dropped from -0.8% to -1.03% (US 10-year). At the end of this year, the precious metal will benefit from a delicate pandemic situation in the United States and Europe with lower nominal interest rates. In the short term, the health situation should take the upper hand over the stimulus plans, benefiting gold.

We believe that industrial metals have entered a Supercycle with prices that will reach record levels. Copper is at 30% of its 2011 high. China will continue its sustained growth and developed countries will invest in traditional infrastructure to support the economy after pandemic. Notably, the United States will renovate/rebuild their networks of roads, highways, bridges, tunnels, water that are in critical condition.

Oil prices are advancing like those of industrial metals, in anticipation of a global economic recovery. But the rise is controlled by OPEC and Russia, which account for 40% of global production, needed to reduce global stocks that exploded in January 2020, at the worst time before the pandemic. We are maintaining our price target for Brent at $ 60 per barrel in the first half of 2021. 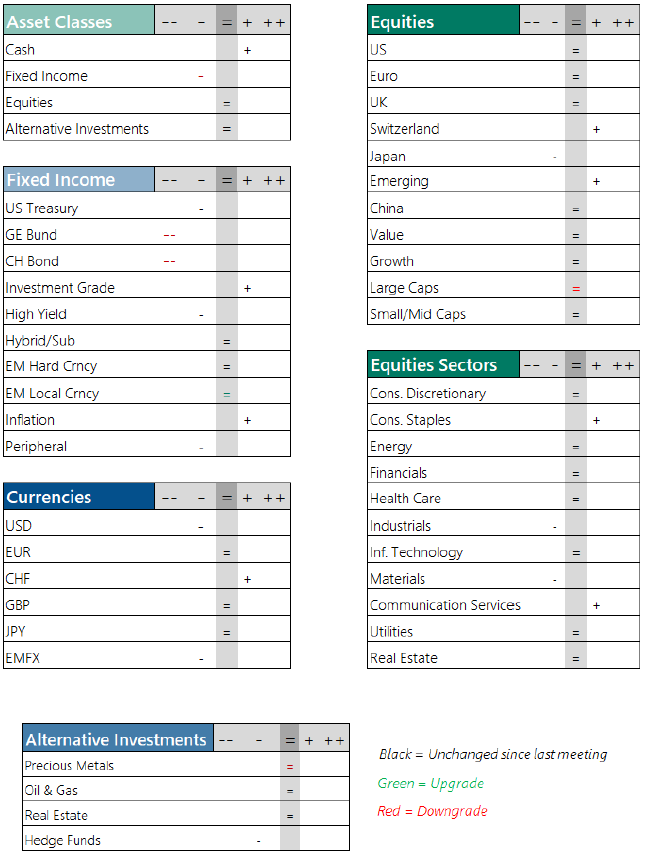 Disclaimer
This document is solely for your information and under no circumstances is it to be used or considered as an offer, or a solicitation of an offer, to buy or sell any investment or other specific product. All information and opinions contained herein has been compiled from sources believed to be reliable and in good faith, but no representation or warranty, express or implied, is made as to their accuracy or completeness. The analysis con-tained herein is based on numerous assumptions and different assumptions could result in materially different results. Past performance of an investment is no guarantee for its future performance. This document is provided solely for the information of professional investors who are ex-pected to make their own investment decisions without undue reliance on its contents. This document may not be reproduced, distributed or published without prior authority of PLEION SA.