From a stainless businessman...

The Times said, based on the Internal Revenue Service transcripts of his tax returns from 1985 to 1994, that Trump’s core businesses racked up losses of more than a billion dollars over ten years. During 1990 and 1991, Trump’s losses “were more than double those of the nearest taxpayers in the I.R.S. information for those years.” In summer 1990, three casinos in Atlantic City, the Plaza Hotel, and the Trump Shuttle airline couldn’t meet their interest payments. Some of the dozens of banks that had lent money to Trump were threatening to foreclose on their loans, which could have caused a cascading chain of bankruptcies, including Trump personally. Banks eventually agreed to keep him afloat by extending more than 60 million dollars in credit, but he was forced to cede his empire management control, at least temporarily.

Since many years, there have been no official release of Trump’s tax returns. But Mazars USA, his accounting firm, has been issued subpoenas by both the Congress (April) and the Manhattan district office (September) to release his last 8 years tax returns. The Supreme Court is now involved in these disputes. Trump is attempting to stretch the boundaries of presidential immunity to avoid his impeachment. The State of New York engaged a criminal investiga-tion into Trump and his family business role in hush-money payments made to keep multiple women from sharing allegations of their affairs with Trump before the 2016 election.

Trump had no Midas touch as an entrepreneur
Still, so far, he always managed to resurface like a Phenix

.. to the Teflon President

The US administration has opened-up several conflicts with both his allies and rival countries, on many different fronts. In geopolitics, the situation in Middle East and Korean peninsula have notably deteriorated lately. Q. Soleimani assassination was at first an erratic and despicable decision. Nevertheless, it has probably successfully set a red line to Iran and sent a warning signal to Kim Jong. The rising tensions in Hong Kong and Taiwan (following latest elections) will add to the complexity of US-China rivalry.

But the latest trade truce and the end of Yuan depreciation are good news, short-term. The US economy is proving resilient and the equity market surpasses its own records yet again. The US Republican party is totally devoted to Trump and will definitely block the impeachment process. As a logical consequence, Trump approval rating is flying highest since his election! No serious Democrat party contender has emerged so far.

Trump has, no doubt, a consummate art of counter-fire The growing impeachment noise is of little - if any – relevance 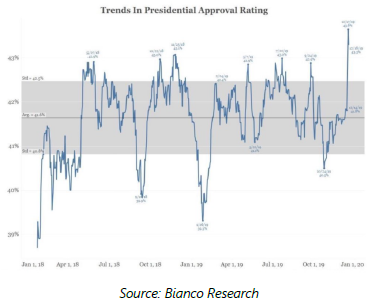 The GBP rose against all G10 currencies in Q4 2019. So far this year, it has failed to outperform and is back to its December lows. Its near-term outlook has somewhat weakened. Several Bank of England members have sounded gloomier despite a better clarity on Brexit. Market expectations for a rate cut by March 26th have jumped from 15% to 65% chance. Risks are titled to the downside. Despite a dovish tilt, it is still too early to expect rate cuts.

Amid a temporary lull in Brexit turbulence, the BoE story is once again drawing the attention of investors. The GBP slipped after BoE Governor Carney signaled the bank was debating the merits of near-term easing. Another BoE member indicated that rate cut is more plausible.

This easing shift is not a new revelation as two BoE members voted for rate cuts at the past meetings. In a world of unprecedented low rates, rate differentials have lost their explanatory powers for FX. That is why GBP volatility, on the back of recent BoE comments, is a breath of fresh air.

On the rate side, the clearest takeaways from Carney’s speech is the very limited appetite for negative interest rates. Even if he is leaving in March, it is a clear signal. This is reinforcing the view that the Effective Lower Bound will remain just over 0% to ensure that overnight market rate remains in positive territory. Another tool is the forward guidance to clearly signal the path of rates. This should help to peg forward interest rates as long as the BOE remains credible. In a context with political uncertainty and complex EU relationship, the path for rates for the next 2 years will be driven by the BOE. Long-end yields will stay low. A BoE move this month would be premature as the no-deal Brexit risks have faded. The BoE should wait to see the extent to which households and firms’ confidence increased because of the vote before adding more stimulus.

A stream of disappointing UK data has confirmed the MPC's concerns. A downside surprise or signs that the data is not improving would likely cement market expectations of a cut. Even if the UK data improve and the BoE refrains from cutting rates in January, the specter of a cut in the months to come (given the clear easing bias) as well as the uncertainty about the form of a UK-EU trade deal suggest that any rebound in sterling should be shallow. The fact that the speculative positioning is no longer stretched (turning from meaningful shorts to modest longs) also suggests limited upside potential for GBP.

It is remarkable how the CHF has strengthened since the December SNB meeting despite fading political risks. One interpretation is that markets are expecting a prolonged period of low inflation without adding to expectations that SNB could cut rate further. The SNB kept its monetary policy unchanged in December at -0.75% and will maintain it in March. It reiterated that the CHF is highly valued and that it is ready to intervene in the market to weaken it, if needed. On a PPP basis, it is only overvalued by 7% which is not that extreme.

However, a stronger currency is not welcome as it slashes all its efforts to push inflation higher. With inflation forecasted at 0.1% in 2020, far from the target and able to fall below 0% in an adverse scenario, the SNB can only maintain rates in negative territory and fight against a strong CHF on the FX market. 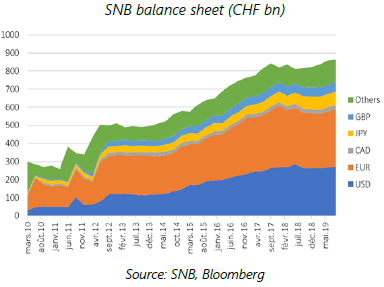 With a 3-month delay, the US Treasury FX Report has been released. As expected, China's manipulator label was lifted, and the attention shift to other countries. Switzerland is an interesting one. Meeting both the bilateral trade and current account criteria, currency interventions by the SNB – more likely, after the recent CHF rally – may warrant the manipulator label. However, some clarifications are needed.

First, the FX purchases currently amount to $3 bn, or 0.5% of GDP. So, meeting the 2% threshold would imply a considerable $12 bn of net purchases in a year. Second, the Treasury requires that net purchases occur for at least 6 of the 12 months covered in the report. So, a one-off intervention may not imply further buying. Third, a possible manipulator label would not happen until October 2020, when the next report will be released. 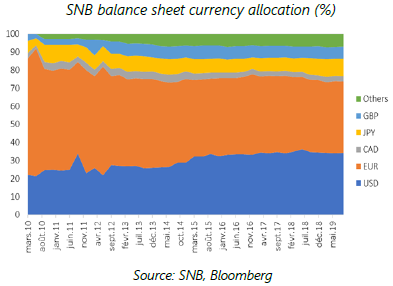 If the Swiss economy is hit by a negative shock or if the CHF appreciates too much, the SNB could be forced to lower its key interest rate even lower, possibly to -1.0%. This is not our base scenario, but the risk of a fall in interest rates remains very present.

The SNB could consider restructuring its balance sheet, out of USD assets into EUR ones, to downplay the US tensions and support the EUR. For the time being, the SNB holds 34% of USD-denominated assets and 40% in EUR. According to the Confederation, in 2018, Switzerland exported 46% to Europe and 16% to the US, while it imported only 64% from Europe and only 8% from the US. Even it was a smart decision to favor US assets – given their excess return – the currency reserve allocation significantly deviates from the trading partners split.

Equities. A new member in the club of over $ 1,000 billion market caps 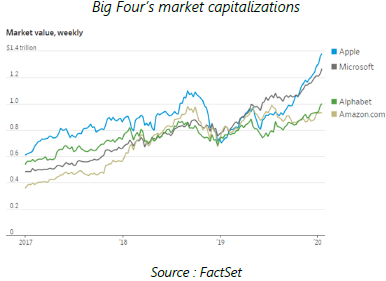 Is such a re-evaluation of multiples justified, at 24x 2020 for Apple and 28x for Alphabet and 29x Microsoft ? These levels are not shocking for companies with annual growth rates of 2017-2021e profits at 30% for Alphabet, 27% Microsoft and 17% Apple.

They also generate a lot of cash: $ 210 billion for Apple (despite $ 175 billion of share repurchases over the last 2 years !), $ 135 billion for Microsoft and $ 123 billion for Alphabet. Moreover, they are, like the others in technology, entering into a new cycle linked to 5G which should boost 1) sales of smartphones, semiconductors, connected objects and data centers, 2) the cloud and 3) augmented reality. 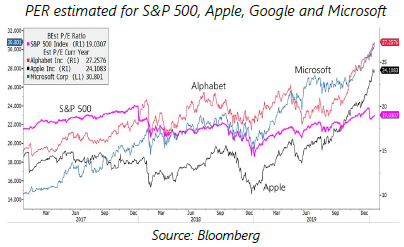 In the short term, technical analysis shows an overbought situation of the FANG+ index and Apple, while Alphabet and Microsoft are flirting with an overbought pattern. 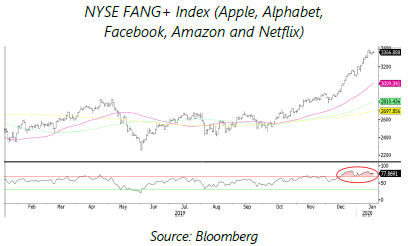 Commodities. Palladium and rhodium are on fire 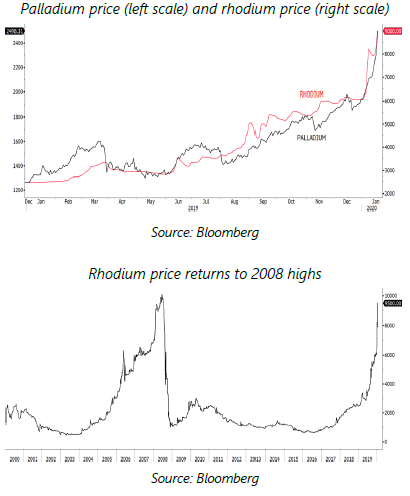 It’s a fundamental story. Demand from the automotive sector has risen sharply due to more stricter CO2 emissions legislation, while supply is in deficit. The majority of the production of palladium (80%) and rhodium (90%) is used for catalytic converters in the automotive industry. 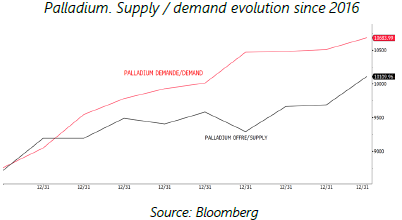 Car manufacturers could look for a cheaper alternative by replacing palladium with platinum. Platinum is not 1-to-1 interchangeable, but it has some similar characteris-tics to palladium. Platinum is mainly used in catalytic converters for diesel engines, whereas palladium for petrol engines. But it could take 2 years to acquire the certifications using platinum, in addition to the costs. Manufacturers should therefore not arbitrate on platinum, especially since catalytic converters represent only a small part of the total cost of a vehicle. However, there is no substitute for rhodium, which is an extremely rare metal.

The 2 main producers of palladium are Russia (40% of world production) and South Africa (35%), followed by Canada (10%). For rhodium, South Africa is the main producer (82%), followed by Russia (10%), Zimbabwe (5%) and Canada (3%). Annual rhodium production is 20 tons with very limited spare capacity, while demand is estimated to be around 28 tons.

Technically, rhodium and palladium are highly over-bought, but their supply is limited. And the two metals are aimed at industrials and not investors. Specialists agree on a higher price for the 2 precious metals, with a solid fundamental history. And after 16 months of declining car sales in the United States, Europe and China, prices for palladium and rhodium could further rise with a recovery in auto sales due to a widening supply / demand imbalance.

The fundamental story of palladium and rhodium is solid. But we would be tempted to play the platinum catch-up, which could benefit from very high palladium prices and a recovery in car sales. 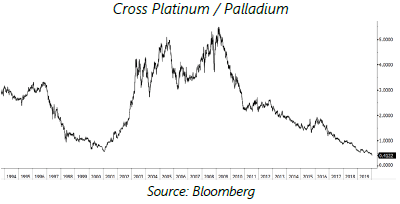 This document is solely for your information and under no circumstances is it to be used or considered as an offer, or a solicitation of an offer, to buy or sell any investment or other specific product. All information and opinions contained herein has been compiled from sources believed to be reliable and in good faith, but no representation or warranty, express or implied, is made as to their accuracy or completeness. The analysis contained herein is based on numerous assumptions and different assumptions could result in materially different results. Past performance of an investment is no guarantee for its future performance. This document is provided solely for the information of professional investors who are expected to make their own investment decisions without undue reliance on its contents. This document may not be reproduced, distributed or published without prior authority of PLEION SA.